The Scarf It Up!  Story 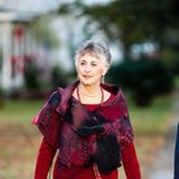 Louise Giordano
How it began....!

Scarf It Up! began with the advent of crazy, textural novelty yarns 20 years ago.
I hadn't knit in about 35 years!  The new and unusual novelty yarns and the cute scarves
that friends were making encouraged me to try some.

A number of scarves later and I realized I couldn't continue to just give them away.
I needed a way to "support my habit!"

Thus began the Scarf It Up! saga - with a very successful first-ever home show in Massachusetts. The rest is history!
Once retired and relocated to Wilmington NC, I became affiliated with Port City Pottery & Fiine Crafts in
The Cotton Exchange, and it has been a wild and wonderful adventure ever since!

I work mostly with fine yarns in natural fibers.  And now I am working with felt - specializing in wet and nuno felting.

My past experience, never trained in the arts, includes 21+ years as a French and Spanish teacher in secondary
schools, 15+ years as a career counselor in higher education, and many years since retiring in private career consulting
​and volunteering.  When not knitting, crocheting, or felting, I am usually playing tennis.
The Ever-Popular Bernadetta Scarf! 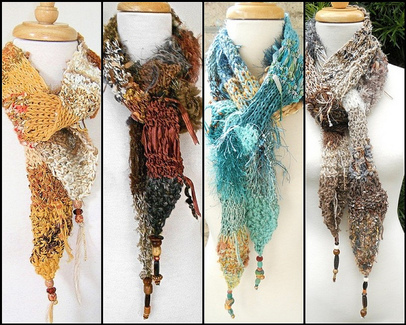 In 2006, I was juried into my first-ever professional show, "Fiber Radicals," at The Independent Art Company in Wilmington.
I determined to design and wear an original scarf.   A friend named Bernie (Bernadette) wanted to buy it, and I declined.
She DID end up with the original, because her husband made me an offer I simply couldn't refuse!
Unfortunately, I have no photo to mark its birth!  BUT I've been making them ever since.

This design distinguishes itself with multiple colors, textures, and stitches throughout,
changing the stitch pattern each time the yarn is changed.